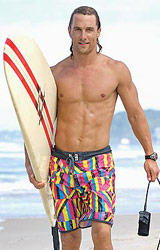 You won’t see Matthew McConaughey doing bench-presses at the gym. In fact, lately, you won’t see People magazine’s “Sexiest Man Alive 2005” anywhere near a gym. Matthew McConaughey maintains his Adonis-like physique by enjoying various calisthenics workouts. The t-shirt-challenged star is often seen doing pushups by the beach, doing pull-ups at the park, running, swimming, or even cycling with his buddy Lance Armstrong. This type of workout are what allow Matthew McConaughey to keep his body lean and sculpted.

However, when McConaughey has to ditch his attractive lean and fit model body and get into action-figure shape for movie roles like his one playing leading-man “Dirk Pitt” in the action-adventure movie “Sahara”, he relies on supersets. Supersets are an excellent way to get in shape and bulk up your muscle mass in a short amount of time.

Basically, a superset is an advanced training method in which you engage your muscles by performing two exercises in a row with no resting time in between the sets. Supersets are advantageous to those who want to have a quick workout, increase the intensity of their workout, and prevent injuries by overloading your muscles without the heavy weights that require a spotter. Supersets allow your body to shed fat and build more muscle in less time by shocking your muscles into accelerated growth.

There are many different types of supersets that you can do. These include:

Pre-exhaustion – Using the same muscle group, do one isolating exercise and then one compound exercise. Ex: leg extensions followed by squats

Post-exhaustion – Same muscle group, do one compound exercise, and then one isolating exercise. Ex: squats followed by leg extension

Tri-Sets – Doing any of the other supersets, but doing three exercises instead of two.

The Science of Fat Loss

How Long Will it Take?