NFL Star Terrell Owens has the most talked about body in sport, so how does he train and diet to keep in such ripped condition?

When it comes to sport there are many guys who fall into the best physique category and Cincinnati Bengals player Terrell Owens (aka. T.O.) comes near the top of that list! At 6ft 3″ and 225 pounds Owens maintains a body fat percentage of just 3-4% pretty much all year round. So how does he do it? What’s his secret to his conditioning? In some of his very own words and excerpts from interviews we can outline Terrell Owens six pack workout and diet program. It’s pretty interesting stuff!!

As you can read in Terrell’s very own book he states that he eats smaller portions more regularly throughout the day, and with his physically demanding job as an NFL player he needs to eat anywhere between 3000 kcal and 4000 kcal per day. Owens suggests that this won’t be needed by everyone as each persons activity levels throughout the day determine the kind of calorie intake that is needed on a daily basis.

Would You Like a Diet Plan set up for you by Fitness Pro’s? Results in 6 Weeks….Guaranteed!
Owens encourages people to become disciplined concerning diet. It is without doubt the most important aspect when it comes to getting in shape. Failure to stick to a clean diet atleast 6 days a week will results in very little progress.
As mentioned above in the book Terrell advises the importance of consuming 5 small meals per day. This helps to keep the metabolism burning at a much higher rate then which leads to greater fat loss. 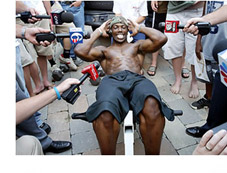 If you thought Terrell spends hours in the gym pumping heavy weights day in day out you’d be sadly mistaken! He doesn’t! Infact he only hits the weights in the off-season. For the rest of the year he uses Resitance Bands to sculpt his physique and also for speed and core training. “I have always been a fan of resistance bands because they are easy to use, easy on the joints, versatile, and can be taken anywhere”. Terrell also uses them to maintain his strength during football season. He works out between 2 -3 times per week during the season. Terrell loves these bands so much that he has recently joined forces with Bodylastics and created his own set of resistance bands called, The Bodylastics Terrell Owens Super Strongman Edition.

Off-season is another story. Terrell trains more with actual iron weights and his workouts are intense. Between sets he even jumps rope. Terrell states “For me, using the bands is easier on the joints and you still get a great pump, I can do the same exercises with the bands that I do with weights. During the course of the season I don’t lift as heavy as I do in the off-season because we do so much running during practice and I don’t want to tire myself out by being in the weight room five days a week. I pretty much work out 2-3 times a week to maintain my strength. I’ve found that I can do this with the bands.”

*On the first two sets, TO keeps his palms neutral. On the last two, he uses lighter weight and pronates his wrists (turns his palms forward) as he presses up.

Note: Owens warms up for seven minutes on a stationary bike before each workout; he has Wednesday, Saturday and Sunday off from lifting.

Now here’s a look at Terrell Owens Bands Workout!!  Not the most conventional approach to training, but it gives you a damn good intensive workout! 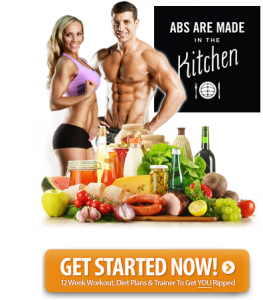